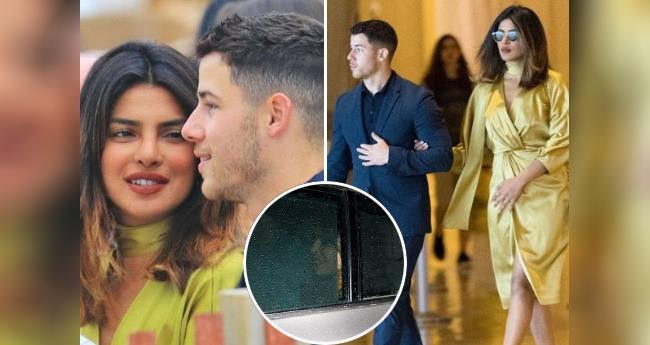 Priyanka Chopra ( Indian actress, singer, film producer, philanthropist, and the winner of the Miss World 2000 pageant) and NIck Jonas ( American singer, songwriter, actor, and record producer) are so coloured in love.At the beginning of June, rumours that Priyanka Chopra and Nick Jonas were dating started circulating, and we couldn’t have been happier, tbh. Priyanka Chopra and her rumoured boyfriend Nick Jonas arrived holding hands for Akash Ambani and Shloka Mehta’s pre-engagement mehendi party. Priyanaka Chopra supports her man in all the way.While watching Nick Jonas perform onstage at the VillaMix Festival in Brazil on Saturday, the actress, 35, let the world know exactly what she thought of the musician’s performance.

The Quantico star’s social media shout-out was reminiscent of a message Jonas had previously penned in her honor. As the pair made their relationship Instagram official earlier this week, the “Chains” singer shared a video of Chopra laughing and smiling on his Instagram Story. Using the same emoji, he simply captioned the clip: “Her.”They spend quality time in GOA along with Priyanka Chopra family.

They were also seen together at a Beauty And The Beast Live concert at the Hollywood Bowl in Los Angeles on Friday, according to Just Jared. Then, the next day, they were spotted by fans at a Los Angeles Dodgers game.In the past, Nick Jonas has been linked to the likes of Olivia Culpo, Kendall Jenner and Selena Gomez. While Priyanka is rumoured to have dated Tom Hiddleston.The pair recently jetted off to Brazil after spending a week together in India, where they attended Aksha Ambani and Shloka Mehta pre-wedding bash.Chopra also used their getaway to introduce Jonas to her mother Madhu.The trio went to dinner together on June 22. Chopra and Jonas also posed for a photo at the restaurant, each putting their arm around the other.“They’re very happy,” a source close to the couple told PEOPLE at the time, adding, “It’s getting serious.”During the pair’s stay, Chopra also called the “Jealous” singer one of her “favorite men,” snappinsssssg a picture of him on the beach.In Interview Priyanaka says, “I am a very ‘live in the today,’ maximum ‘live in the next two months’ kind of person,” Chopra recently told PEOPLE. “But [in] 10 years, I definitely want to have kids. That is, it’s going to happen in the next 10 years. Well, hopefully earlier than that. I’m very fond of children and I want to be able to do that.”