The trade between the United States and China is about to get serious. 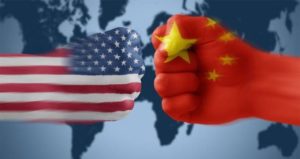 After months of threats and skirmishes, the trade between the United States and China is about to get serious.

On Friday, the world’s to top economies are due to exchange fire by hitting 34 billion dollar of each others export with steep new tariff, the first move in what maybe become a devastating cycle of retaliation. Consumers and businesses are expected to face higher prices as the US and China trade tit for tat tariffs. The US and China are now embroiled in what Beijing has dubbed trade war in economic history and President Donald Trump long threatened series of went into effective overnight,. Prompting of Swift response from Asia largest economy. Donald Trump and his advisor argue the tariffs unnecessary to pressure China into abandoning unfair practices such as stealing intellectual properties enforcing American companies To handover valuable Technology. Beijing denies it is the wrong and say it’s ready to fight a trade wall until the end.

America’s trade deficit with China, however has continued to expand in recent months, leaving US consumers who are buying increasingly more Chinese good then the other way around vulnerable to price increases and American exporters eager to break into Chinese Market in the crosshairs for international retaliation.